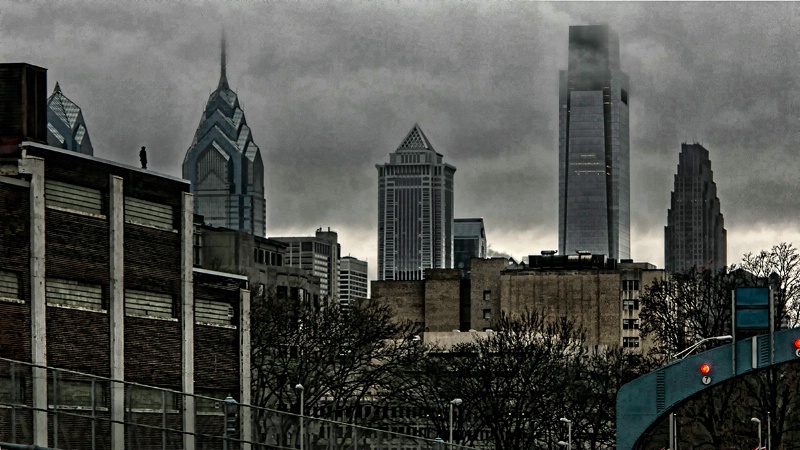 I like the statue and the clouds floating across the buildings. #1614272

Like they say "If you are going to get wet you might as well get soaked" - Very dramatic - Great capture Michelle! #11283955

This image has a foreboding mood to it Michelle! The sky adds to the drama of this wonderful image! #11284253

Looks pretty ominous, Michelle! A fantastic shot although it's too bad you got soaked! #11284398

Excellent timing and fast shooting, Michelle. A talent in and of itself. #11285019

Love the dramatic look of the picture with that sky. Love the design work of the buildings and the little man. Gorgeous work Michelle. #11285334

Excellent. I like this different point of view of the city. I'm enjoying your photos. Your love of life comes through. #11332872

I was a passenger as we came off the Ben Franklin Bridge (Camden, New Jersey to Philadelphia) after having been soaked to the bone in a torrential storm during a photo shoot. This is an interesting view of the Philly skyline. The little man that seems to be walking on the roof of the building on the left is really the gigantic statue of William Penn that sits on top of the City Hall tower. And the Comcast Center (2nd from right), now the tallest building in Philadelphia, will lose that status in 2017, as Comcast's second building is completed. It has just begun to rise above a large hole just one block from its amazing Dad.

Copyright for this gallery photo belongs solely to Michelle Alton. Images may not be copied, downloaded, or used in any way without the expressed, written permission of the photographer.
Log in to follow or message this photographer or report this photo.